I feel so all alone, and no one's gonna miss me when I'm broke. How do you cry with inanimate eyes? You're never gonna smile with the way that you're wired. All Alone, by Fun.

Of course, music although the main part of the equation when evaluating the Emo movement; there is also the wardrobe to consider.

Emo music has even inspired its own subcultural style. Again as with the general definition of emo there is no one definition and there are main two sides to the style - the past and present. soEMO will be mainly referring to the present day emo, scene, etc fashion and style.

Emo fashion has changed dramatically over a period of time and is prevalent mostly among teenagers. It has been described as a perfect outlet for fickle teens trying on personalities. Gothic and punk cultures have a great influence on Emo fashion. Some people wrongly consider emo to follow the common goth look - "chalky white faces, black eyes, lips and clothing." Numerous articles describe the fashion as similar to goth, but more fluffy and sugar-coated by taking basic gothic fashion, (skulls, crosses, too much eyeliner, etc), making it tighter, and adding stripes of colour.

Nowadays emo fashion has evolved and is considered trendier, especially what is now considered as "scene". However, Emo fashion still can be characterised as distinctly non-fashionable. Emo individuals perceive themselves to be outcasts and dress accordingly so as to avoid any appearance of attempting conformity. The emo look has now become considerably widespread and popular in today's society. The look is described in detail below:

Probably nothing characterises the Emo look more than the Emo hairstyle, which features:

A long fringe (bangs) brushed to one side of the face or over one or both eyes, dyed black (and/or other colours), straightened (and layered). Spikes are occasionally accentuated at certain angles of the hair, especially at the back. A common generalization for emo hair is short in the back and long in the front.

However, there are many emo-looking hair styles long or short to choose from and it's important to think outside the box. Emo has its roots in the punk scene, and isn't just limited to black with a long fringe. Hair can be dark brown, black, blond, purple or any color you want - as long as the cut is expressive of a punk rock culture and has a little emo flare. Black hair, for example, may be highlighted with white accents, vibrant red streaks, orange tones, or any other shade the individual prefers. At the same time, any color that is bold and vibrant can be considered an emo look. Wear super girly hair bands, bandannas, ribbons. It's up to you!

It is a misconception that emo styles aren't washed frequently. While some teenagers may choose not to wash their hair regularly, this is not a necessary characteristic of emo styles.

Emo hairstyles are a great way to play around with your look. They allow you to have fun, be creative and unique. An Emo hairstyle treats your hair like a canvas; you have artistic freedom to express who you are, to show off your personal style almost like an art form. The beauty of an Emo hairstyle is how un-uniformed it is; they are asymmetrical and rather choppy.

As a result some emos prefer DIY hair or by cut by a friend at home shunning the processed, rubber-stamped appearance of mainstream hairstyles. A mistake in your cutting could actually turn into an advantage in your Emo look. Although sometimes it is best to visit a trained professional that you can clearly show what you want.

A great sculpting gel and some decent hairspray (don't overdo it) will be a good addition to your hairstyling collection. The right hair products will allow you to mold & shape your Emo hairstyle the way you want it to go.

Finally a pair of straighteners is important for many emo haircuts.

The term "slim fitted" is key to dressing emo. By almost all current definitions, Emo clothing is characterised by tight emo jeans (aka drainpipes or skinnies) on males and females alike. Males also sometimes where girls jeans as they "fit better". Dresses and skirts can be worn by girls if properly paired with converse and leg warmers.

Tight emo t shirts which often bear the name of rock bands such as "As I Lay Dying" or "Cute is What We Aim For" with common iconic symbols of emo such as the broken heart, the bleeding heart, stars and the every so popular skull. Vintage shirts are also still popular including vintage-looking printed tees with random things like robots, dinosaurs, or any random icon that makes people think. Originality (at least the illusion of originality) is the key.

A dark coloured zip-hoodie is a classic must have. Like the shirts, the emo hoodies these can be plain or covered in strange ghoulish and self deprecating designs with bleeding hearts, ribs, etc.

Black is probably the most popular colour for all the emo clothing, but certainly not the only colour. Emo's generally wear less black than Goths for example.

Note it's a misconception that emo's have to follow the frail/skinny look. 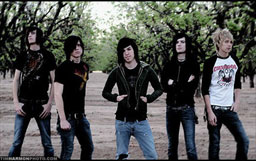 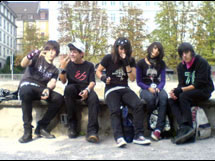 As for makeup emo's tend to accentuate their eyes with black, red, etc eyeliner and eye shadow. Gerard Way is a good example of someone who embraced this technique with cranberry red eyeshadow. Dark nail polish is also a defining factor on both sexes.

The emo look commonly includes being as pale as your natural skin tone will allow, with the use of a whitening foundation of a super light powder. However, this certainly isn't such a key feature as it is with the goth look.

Look up emo on Google, find different sources and come to your own conclusions, but don't just dress like a poser and not know anything about it. After all, nobody likes a poser. Just be yourself. Emo is a scene. A music scene. If you want to be emo and dress emo you should really have an interest in the music. People can of course look "emo" and not be into the music though.

Don't become the generic "I hate life", "I'm so depressed", or "I want to die" 'emo' kid. If you feel one of these things, question your reasons for feeling that way. You need to think deeply about things and talk to someone.

Parents and other adults may not understand or like your emo fashion and style. Who cares! Also some people hate emo's, so be warned that you might be disliked for who you are. Just don't listen too much and be what you want to be. It's your life...

Very interesting and helpful article, keep up the good work all time. Thank you for sharing https://www.gothicattitude.com/men-coats