Oh, bare grace misery Just a child without a fairytale am I Dark but so lovely A Little Match Girl freezing in the snow Bare Grace Misery, by Nightwish

Like the social and fashion trends of eras long gone, emo is not simply about the way you dress - it is a lifestyle. It culminates in your clothing, shoes, hairstyle, attitude and - most importantly - musical selection. This section describes the emo lifestyle and attitudes.

People do tend to adopt at least the attitudes of the music they listen to most even if they don't admit it. This is because a lot of people are not able to separate themselves from the ideas that are expressed. Music is different from other art-forms in that it penetrates the soul in a way something visual cannot.

People seem to like to group together for some reason, its in our nature, and "emo" is just another group or sub-culture. People "join" it because they might agree with some, most or all of what the group is generally about.

Being "Emo" is just another way that people are trying to express themselves, really the same as other street styles, just with a different soundtrack. In the end, each of the people who have chosen to follow the scene is their own person- they are just part of a scene that is tipped as being defiant and unacceptable- something most young people are drawn to.

Firstly, labeling someone as an emo based on their hair style is a poor way to interpret personal expression, just as calling someone a goth based on their preference for black clothing. Whether or not a person listens to emo music, writes emo poetry, or adopts an alternative lifestyle is a personal decision that does not automatically have anything to do with the colour or cut of their hair. Emo styles are unique, individual looks that say a lot about the persons style, but the emotions behind them may never be understood by anyone else.

When referring to a person's personality and attitude, most definitions of emo include a number of the following terms: sensitive, shy, quiet, sad, introverted, glum, self-pitying, mysterious and angst ridden. Depression and broken-heartedness are sometimes used to describe the emo personality. Emo's feel society doesn't accept them, they are outcasts and nobody understands them! This is generalising and it is important to note those into the emo / scene culture can obviously also be the opposite of the personality traits listed above as with anyone.

At its core, emo is all about being upfront with your emotions. Hot Topic even issued a patch that read, "cheer up, emo kid!" These personality traits are often identified by his/her music and fashion (generalising here). For example the emo band Hawthorne Heights contains multiple references to unrequited love, emotional and relationship problems. Many of these traits are present in most teenagers and not just emos!

The courting of misery and death is a long-established teenage tradition. When death is a long way off, you can afford to be more morbid about it. In particular, Goths and Emos are a rebellion against sporty, manly cultures.

Frailness, which conveys a sense of vulnerability has been associated with the male emo's in particular, but from what I know this isn't particularly valid.

Finally touching on the term "scene" that has become popular since the emo subculture kicked off. Scene kids I believe are more about the style and looking like an emo without the personality of it all. In other words, scene kids are the ones that dress emo, but only because it's a trend or you could say Scene is Emo without the emotion. The term is subject to significant debate like emo though.

Emo kids love the same things that other teenagers (and adults) do: they keep friends, love, smile and cry, go to the cinema or to concerts. Emos just tend to take the world around them in a more emotional way.

Artist talent is known to be associated with the emo culture along with a degree of sophistication and depth lacking in the blonde, bouncy chav faces which dominate our television screens and nightclubs.

Usually, Emo kids like to express their feelings writing poems and song lyrics about their problems with depression, loneliness, confusion, and anger; all because the world fails to understand them.

Emo's like to go to gigs and gather on online communities such as this site, MySpace, Facebook, Bebo etc. In fact you can find a lot of emo's on the Internet. As a quick example, check out MySpace. It's the equivalent of a mating season for snakes, for emo's. Emos have a preference for taking photos using weird camera angles and Photoshopping them.

Emo's also like to use euphemisms in captions that are difficult to understand. For example, drawings of bloody eyeballs or a knife put to the wrist will be accompanied by emotive captions such as "If this is what it takes to make you listen."

Emo kids seek out each other to express their views on a society that they hate. The Internet has helped emo spread its web, allowing kids to access bands, ideas, ideology and emo culture.

Emo's are known to promote vegetarianism for moral reasons (which is one of their links to Straight Edge) They are also for the most part pacifistic and accepting, which can't be said for some of those who dislike Emo's.

The behaviors, attitudes, and values expressed through the music involve emotionally turbulent themes often associated with adolescence such as despair, nostalgia, heartbreak, hope, and self-loathing. The various and sometimes conflicting social practices associated with Emo subculture contain valuable insights into what it means to be an adolescent today.

Emo clearly is a popular genre with a lot of attractive elements to it and can help a person find friends where they aren't accepted elsewhere. For many youth, the Emo subculture facilitates identity formation, social interactions, and emotional involvement. It is a place where many adolescents share their experiences about the world and express their feelings about life through music. 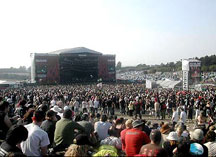 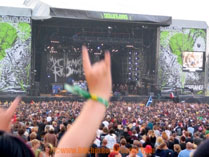 Pon and Zi
by Jeff Thomas

In the years since emo music's rise in popularity, both emo music and emo subculture have attracted sometimes severe criticism. The term emo itself is sometimes used pejoratively, to suggest that the target is "overly emotional" or "melodramatic." The outward expression of feelings makes them a target for ridicule. For example many articles bring us back to the age-old question: "How many emo kids does it take to screw in a light bulb? The answer is none. They prefer to sit alone in the dark and cry."

Critics of the sub-culture think that because emos feel that their lives are so tragic they should go to Africa or some other 3rd world country, and try to cope with their problems!

They feel that members of the subculture imagine or pretend that they lead harsh, painful lives when they actually live in comfortable, middle- to upper-class homes.

Numerous critics carry on to state that emos should get over themselves and that everyone's got it rough, but still manage to make it through. You just have to peel away the darkness and look at the light.

The whole Emo scene has been characterised as a ridiculous fad that will be discarded and forgotten in the near future.

Self Harm, Depression and Suicide

Self-harm is wrongly associated with the emo culture and the media has played a large part in this describing "emo" as a corruptor of youth, which evokes a dangerous behavior that has taken control of kids. The popular article titled "EMO cult warning for parents" published by The Daily Mail has been slated for being poorly researched and very stereotypical as a result. The author, Sarah Sands states that, "the point of distinction, frightening for schools and parents, is a celebration of self harm. Emo's exchange competitive messages on their teenage websites about the scars on their wrists and how best to display them. Girls' secondary schools have for some time been concerned about the increase in self harm." The article gets more absurd mentioning "...a cult of suicide could have real and horrible consequences."

In response to this article and numerous later and equally ludicrous ones, passionate MCR (My Chemical Romance) / Emo Fans went to the effort of staging a protest against The Daily Mail's false "suicide cult" claims in London, UK

Some people feel that it's the emo music which is too largely blame for all of this because the bands sing about self harming, etc and they inform a fragile audience that this is a way of life. A few bands do occasionally mention self harm but the main theme of most emo bands is heartbreak, not suicide or self harm. Plus what about other genres of music where the lyrics are about guns and drugs...Violent video-games? So many things can be seen as a bad influence to people. It's a never-ending circle.

Many emo's may well be depressed but saying that the culture is a "celebration of self harm", dangerous and increasing teenage suicide rates is a ridiculous exaggeration with no proven research. People who are emo are not depressed all the time, and they certainly do not condone suicide and self mutilation, only a hand full of radicals, just like any sub-culture. Furthermore, self-harm, depression and suicide has been a problem long before emo became a way to stereotype bands and people. People get depressed for many reasons; their girlfriend/boyfriend broke up with them, their dad or mom is an alcoholic, they had a close member of their family die, etc.

Cutting and other self-injury behaviors are serious - not "emo" and those doing this should seek help.

There are a mass of articles and associated comments that stereotype the whole emo scene to death.

What is sad is the people who search for emo related key phrases on the web, find these emo websites just to bitch. Let people be who they want to be. It's not your choice. Leave them alone and let them live their lives so you can go live yours.

Why do people waste their time if they have no interest in the topic besides to write comments to people they don't know that barely make sense or just repeat the one above.

It is very annoying, and ironic, as you accuse the emo's of being just whiny people, when you're whining and complaining about them. Are they really bothering you that much?

It's pathetic and ignorant that people are judged by the way they dress or music they listen to. These do not make you a bad person or vice versa its clothing and music, nothing more. It's Not About The Way You Dress Or What Music You Listen To It's You. Consider the well know phrase, "Labels are for soup cans, not people." Of course some people hate and disagree with this phrase as well...

There are many emo articles with 100s of pointless comments. This is just annoying for viewers who actually want to learn about the emo scene.

At the end of the day we are entitled to our own opinions though and stereotypes are always going to exist.

In conclusion, gain influences from everyone and everything around you of course, do what you want to do and be who you want to be!