this world, this world is cold. but you dont, you dont have to go. you're feeling sad, you're feeling lonely. and mo one seems to care. your mothers gone and your father hits you. this pain you can not bare. hold on, by Good Charlotte 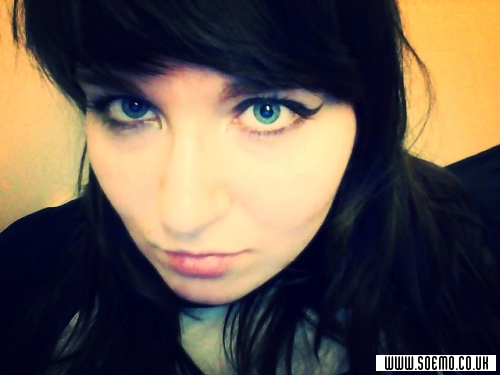 Heyyyy, I'm Sophie, I'm 20 and I'm from Norfolk (don't start on about Norfolk stereotypes -.- )
I'm reaaaaally into music and theatre. This includes listening/watching and participating. I play flute, saxophone & piano (am trying to learn guitar too) and love getting involved in local theatre projects. It's my aim in life to become an actress, and certainly I want to follow a career in theatre.
I don't actually describe myself as emo, as my style seems to change daily depending on my mood. I'd describe myself as alternative instead, and am open to meeting all people, of all the alternative subcultures, and anyone not alternative who doesn't judge me because of my appearance.
I've been in a relationship with my amazing boyfriend, Henry, for two and a half years. He describes himself as a "metalgoth", but he's also pretty open to meeting anyone who doesn't judge him for his appearance :) Though we're both completely committed to each other, so if you try flirting with me, it won't get you anywhere! :P
People would rather have a monster they know than a mystery they don't - Lucas, Kevin Brooks

Do you really want me to list all the bands I like?
Paramore, The Blackout, Three Days Grace, Bowling For Soup, The All-American Rejects, Scouting For Girls, Flyleaf, My Chemical Romance, Family Force 5, Seether, Fall Out Boy, Billy Talent, Hollywood Undead, You Me At Six, The Fray, Good Charlotte, Simple Plan, Escape The Fate, P!nk, Cute Is What We Aim For, Avril Lavigne, Bullet For My Valentine, Boys Like Girls, All Time Low, Madina Lake, The Academy Is..., 3 Doors Down, VersaEmerge, Papa Roach, Breaking Benjamin,Nickelback, Hey Monday,Green Day, Art Of Dying, Alter Bridge, Avenged Sevenfold, Glamour Of The Kill, Forever The Sickest Kids, Yashin, Falling In Reverse, Taking Back Sunday, The Audition, Mayday Parade
and many more who I really cba to say =D

Films? Hot Fuzz, Hunger Games, Harry Potter, POTC, Scott Pilgrim
Tv? Doctor Who, Sherlock, Mock The Week
I like a lot of books.
The Chaos Walking trilogy is the best thing ever.
And Doctor Who books.

Am at uni studying Drama and Applied Theatre CUZ I'M AWESOME.
And I work for the House of Commons, which is PRETTY FUCKING AMAZING.

You ;)
Nahh, I'm open to meeting most people. Unless you're annoying. =L